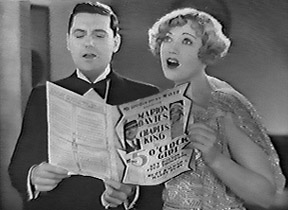 Metro-Goldwyn-Mayer, 1928
Unreleased
Cast:
Marion Davies, Joel McCrea.
Songs:
Up in the Clouds, Thinking of You.
Synopsis:
Marion plays Pat, a shop girl in a cleaners whos boyfriend (McCrea) is a local plumber. Based on the hit Broadway musical of the same name, the stage version starred Oscar Shaw and Mary Eaton. Marion apparently had a good time filming this one, the MGM still collection on the film is loaded with hilarious pictures of her famed clowning. She would try on clothes that people brought in to the cleaners and take on their owners personalities.

No one knows exactly why this film was never released. It was an early talkie, and perhaps the sound wasn't considered advanced enough to carry a musical? The main story is that W.R. Hearst had it pulled after it was completed because he didn't want Marion's talkie debut to be playing a shop girl. Humerous considering her talkie debut ended up as "Marianne" in which she played a young beautiful French girl with 40 lusting G.I's in her barn! At this point, MGM claims to have no prints of the film so it is lost. Perhaps, like Eddie Cantor's "Whoopee!" it will pop up somewhere and we will be able to enjoy Marion's real first talkie.